John 3:8 (ESV): "The wind blows where it wishes, and you hear its sound, but you do not know where it comes from or where it goes. So it is with everyone who is born of the Spirit." 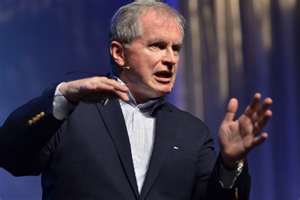 “You may not be able to give a detailed breakdown of the mechanics of “new birth,” but you can’t deny the effect.”

God “pours out His Spirit so that people are transformed. And even if you don’t understand the mechanics, you can’t deny the effect. So if there are in churches in America lots and lots of people who claim to be ‘born again,’ because they’ve signed a card or gone forward or whatever they’ve done, they’ve been processed, but their lives are indistinguishable from the lives of people who aren’t Christians all around in terms of their vocabulary, their use of time, their goals, what they think about, what they dream about, what they look for in a mate, what they want to do with their pocketbook, they’re indistinguishable from any friendly neighborhood pagan, but they’ve been ‘born again,’ then I have to tell them … they haven’t been. Because this text says the new birth is so transforming that you see the effects even if you can’t explain the mechanics. ‘So it is with everyone who is born again’ Jesus says.”

You can listen or watch the whole sermon here.

Some interesting debates have been occurring recently regarding the "Sinner's Prayer," specifically among Southern Baptist's. Christianity Today has an article summarizing some of the recent thoughts.

Some might think of it as the "ask Jesus into your heart" controversy ... but here are some links for your consideration:

I was on Moody Radio's "Up For Debate" program last Saturday with Julie Roys. I debated Chuck Bentley on the issue of tithing. Chuck is the CEO of Crown Financial Ministries.

Here's the link to listen. I'll try to post some follow-up comments in the coming days regarding the program.

Which Bible Translation Should I Use?

I just finished reading through the page-proofs for the final time for Which Bible Translation Should I Use ... due out this Fall with B&H. I'm excited that this resource will truly help people to have more trust in Scripture and be more discerning in their use of translations.

Saw this article this week on the upcoming release of the book.
Posted by David A. Croteau at 2:36 PM 1 comment: