IdealShape, the meal replacement shake I discussed yesterday on this blog, has a monthly context. I entered the context in March and WON! Here is the story. This gives me a chance to win a Caribbean cruise and $1000 later this year. It will be based upon voting done on Facebook. Monday I'll share some of the recipes I've used in making my shakes.
Posted by David A. Croteau at 9:30 AM No comments:

About 13 months ago I saw a picture of myself and I was shocked. I couldn't believe how much weight I had put on ... it was incredible. I had been sitting around 170-180 pounds for several years, which for me is about 30 pounds or so overweight. That picture made me realize it was time to get serious ... the picture and my sore knees. So two main tools helped me lose the weight:

1) An app on my smartphone called MyFitnessPal. There is no magic to weight loss; it really comes down to counting calories for most people. This free app helps you track exactly how many calories you are eating. I slowly lowered my intake from 1600 to 1400 to 1200 per day. The hard part was figuring out how to "feel full" and take in foods that didn't have a lot of calories. That's when I found a second "tool".

2) IdealShape. IdealShape is a meal replacement shake. In that past I tried SlimFast, but: 1) I didn't care much for the flavor; and 2) it has way too much sugar. So, after researching replacement shakes, IdealShape seemed to be the most healthy. I was scared to sink in such a large amount of money for a one month supply, but I figured my health was worth it. So I ordered some of the chocolate. I think it's very good. One scoop costs about $1.50 and has 120 calories. I started off using vanilla sweetened almond milk (90 calories), then I tried the vanilla unsweetened almond milk (only 30 calories). So, my breakfast was only 150 calories and my lunch was only 150 calories ... I still had 900 calories for dinner. Sometimes I found myself trying to find a way to get all 900 calories for dinner because I was so full. I know how crazy that sounds ... and it wasn't every night ... but sometimes I had a hard time getting to 1200 calories. But I tried to make it a rule to never go much over 1200 calories per day.
In about 8 months I lost 65 pounds: from 207 to 142. That works out to close to 2 pounds per week, the fastest you really want to lose weight. I looked in to metabolism a lot and talked to a few doctors and I decided to try and hold my weight in the 140's for a few months. So from November through March I've been holding steady. My BMI (body mass index) is about 22.2, which is pretty much in the middle of normal ... 138 would be right in the middle of normal. That's my next goal.

Tomorrow I'll give some more news on IdealShape and Monday I'll share some of the different "formulas" I've used with IdealShape.
Posted by David A. Croteau at 9:37 PM No comments:

Here Is One Shortstop that Got Stopped Short 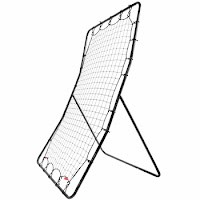 I loved playing baseball when I was a child. I used to swing by bat 1,000 times per day to perfect my swing; I had a net I could throw the baseball into so that it would come back as either a fly ball, line drive, or ground ball ... I would throw at that thing for hours. Anything related to baseball was my passion.

When I was about 10 years old, I was playing shortstop and covering second base on a steal attempt by a kid named Brian Clayton. The ball was coming late so I thought I stepped forward to let him get by. He dove head first in to my left leg. My mom said she thought his helmet cracked because of the loud noise ... but his helmet didn't break, my leg did. I was carried to my dad's car and rushed to the hospital.

A few days in the hospital, a week in a wheelchair, and about 5-6 months in a cast. One neat thing that happened was my first "brush with fame": some local minor league baseball players visited me in the hospital. Scott Bailes, Craig Brown, and Mike Berger came and gave me some tickets to a baseball game. Here's the newspaper article here. The t-shirt I wearing says: "Here is one shortstop that got stopped short." 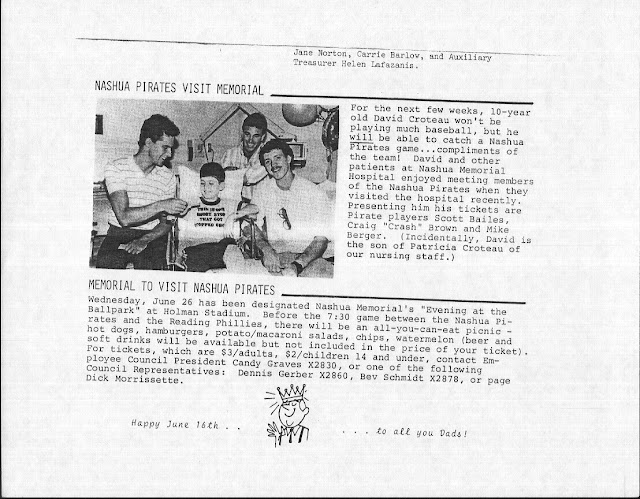 Posted by David A. Croteau at 6:41 AM No comments:

The Second Command to Give LESS than 10% 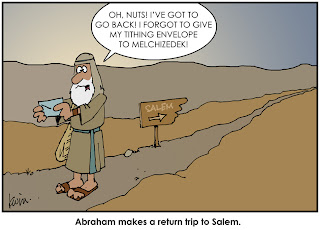 We've been talking about verses that command the Israelites to give less than 10%. The first example was Leviticus 27:30-33. Here is the second example:

In Numbers 31:27-28, the Law declares what percentage of the spoils of war should be set aside as a tribute for the Lord. Your expectation might be that the Lord would require 10% of the spoils. However, the number is much less than 10%. It is 1 out of every 500! Yes, 0.2% was required.

I attempt to ascertain the underlying theological principles in the specific laws in the Mosaic Covenant in order to find the eternal concept that can be applied to today. The best I could do for this verse was that unusual sources of income would be the concept underlying "spoils of war". IF that is correct, does that mean that I can give less than 10% when I have an unusual source of income?

My main point from these last three posts is this: the amount required by God of the Israelites in the Mosaic Law was NOT "10% of income". What was it? It is so complicated and varied that no number could be entirely accurate, when you consider the multiple tithes, the offerings, gleanings, freewill offerings, spoils of war tributes, and, especially, the animal tithe. The best someone could do is give an estimate, and even that would be FAR from certain.

I don't believe the Old Testament unlocks the principles that should drive Christian giving. There are MANY principles explained in Scripture, but giving a mandated 10% is not one of them.
Posted by David A. Croteau at 7:30 AM 1 comment:

The First Command to Give LESS than 10% 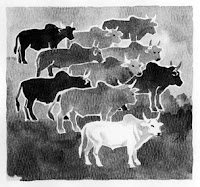 Last time I asked if there were any verses that commanded the Israelites to give less than 10%. Here is the first one I've found:

Leviticus 27:30-33 is very clear about how to decide upon the animal from the herd or flock that will be tithed. The shepherd was to have them pass by him and he would count them. The tenth animal that passes under his rod would be tithed, whether it was healthy or sick, good or bad. So let’s think this through …

Think about it: this law is constructed in a way that almost guarantees that the Israelite will give LESS than 10%! The only situation in which he would give exactly ten percent was if his number of animals was exactly a multiple of ten.

Leviticus 27:30-33 is a command which, when applied by Israelites, would have the majority of them giving LESS than 10% in an Animal Tithe.
Posted by David A. Croteau at 7:30 AM 1 comment:

The Transforming Power of the Gospel 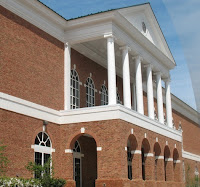 I have not preached very much in my time in Lynchburg, VA, but I was asked to preach the Sunday evening service on February 24, 2013 at Heritage Baptist Church. The text was Ephesians 2:1-10 and the title was The Transforming Power of the Gospel. You can watch the evening service here. The sermon starts at about the 26 minute mark.
Posted by David A. Croteau at 5:07 PM No comments:

Does Scripture EVER Command to Give LESS Than 10%? 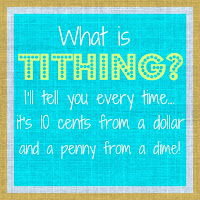 I believe that the key to understanding how virtually impossible it is to apply tithing from the Old Testament to the New Testament believer is by correctly defining the tithe in the Old Testament Law. Once the passages are read and understood properly, the complexity, the specifics, and the (actual) amount given makes the problem utterly clear.

However, when I give the definition of the tithe in the Old Testament Law and explain it, I lose people … I see their eyes start to slowly shut. I might keep their attention when I talk about the Levitical Tithe, but once I hit the Festival Tithe they start shutting down.

So, I want to try a different approach. Those who advocate tithing today are basically saying that Christians must give at least 10% of their income to God (usually, to their local church). When the issue of the Old Testament Law comes up, they usually either assume that the Israelites gave 10% of their income or they recognize that it was closer to 20% or 23 1/3%. If the latter, they say that we should be at least giving 10% under grace if they gave at least 20% under the Mosaic Law.

I have a question: what if the Mosaic Law commanded giving less that 10% of income? What if there was a verse in the Mosaic Law that explicitly stated that they were to give but the percentage was LESS than 10%? Would that have any impact on the idea of a mandated 10%? Maybe not, but there isn’t one verse … there are TWO (that I’ve found at least).

We will discuss them over the next couple of days.
Posted by David A. Croteau at 7:30 AM 5 comments:

Tithing After the Cross by Energion Publications

My next book is about to be released: Tithing After the Cross. This book (about 90 pages in length) is a refutation of the top arguments for a mandated tithe and presents a new paradigm for Christian giving. Here is the publisher's description.

The Areopagus series is a great collection of books/booklets covering issues related to theology and ministry, like divorce and remarriage and Greek word studies. I highly recommend you check out the different volumes. One of the editors of this series is David Alan Black who was the first professor I ever wrote on this topic for. This will be my third book on this topic ... a probably my last :) 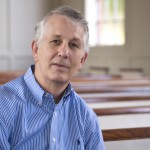 The Biblical Studies Symposium at Liberty University is taking place this Monday, March 4th, 2013. The speaker is J. Daniel Hays, co-author of the great hermeneutics book Grasping God's Word. The general topic for the symposium this year is race. In the morning at 10am in the Towns Alumni Lecture Hall he will be preaching on "The Two Ethiopian Eunuchs: Parallel Paradigms for Salvation." In the evening, at 7:30pm in the Towns Alumni Lecture Hall, his topic is "A Biblical Perspective on Interracial Marriage: Toward a Biblical Theology of Race." There will be a Q&A to follow the evening session through twitter. 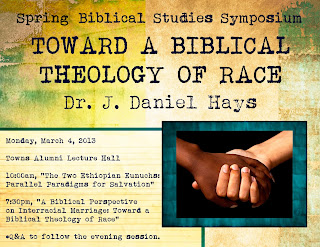 A few more things to note. There will be a table with many of Dr. Hays' books on display and for sale at the symposium. Also, the evening session will be live streamed over of the internet if you can't make it to campus. Click here on Monday evening to be taken to the live stream. The Q&A will be available for anyone through twitter. If you tune in online or if you are there live, the questions will be gathered from a hash tag that will be announced during the evening symposium.