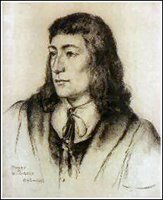 Modern Baptists, particularly Southern Baptists, are some of the most ardent advocates of tithing, especially “storehouse tithing.” But is this a traditional Baptist belief?

John Smyth, a Separatist and considered by many the first ‘modern’ Baptist, said: “Wee hold that tithes are either Jewish or popish.” Roger Williams (pictured to the left), who settled in Narragansett Bay (now Providence, RI) in 1636, said that ministers should serve freely “and that not in stinted wages, tithes, stipends, salaries” are they to be paid. John Bunyan (pictured below Williams)(1628–1688), author of Pilgrim’s Progress, commented on Luke 18:10–13: “This paying of tithes was ceremonial, such as came in and 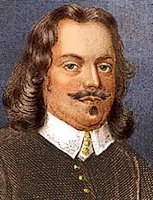 went out with the typical priesthood.” Luther Powell, a tithing advocate, said (of Baptists and tithing): “By and large, the Baptists—although inconsistent at times—remained true to the principles of separation of church and state and voluntary support of the ministry. They, more than any other group, are the representatives of the philosophy of church support which emphasizes voluntary support on the congregational level.” Basically they held to freewill support rather than “salaries, wages, stipends, or tithes.”

Francis Wayland, an early Southern Baptist (1859), provided a description of providing ministerial support that is at variance with any advocacy for tithing. Early Baptists in England (1600s) were adamantly against tithing. They utilized Hebrews 7:12 to argue for the abrogation of the tithe.

Therefore, Baptists in America during this period were specifically opposed to tithing. They believed that alms were meant for the poor and that every member of the congregation should give liberally to meet the needs of their minister. However, Baptists were known for their stinginess and their ministers generally did not have an adequate income. The early Baptists did not address the issue of what percentage or proportion should be given since the amount was left for the individual to decide. Baptists were not simply ignorant of the practice, rather they formally disagreed with the tithing model. Eventually the Southern Baptist Convention adopted a statement supporting tithing in 1895. Therefore, Baptists generally did not accept tithing as obligatory for Christians from its founding (ca. 1600) to the late 1800s, almost 300 years. Therefore, how, where, and with whom, did the tithing renewal get its impetus?

What is “storehouse tithing”?

For a reference to this concept, see an SBC ad hoc committee that recently said (at www.biblicalrecorder.org/content/news/2006/02_22_2006/ne220206sbc.shtml): "The ad hoc committee report also calls on individual Southern Baptists to 'practice storehouse tithing as the beginning point for kingdom giving.'"

Why isn't the "gift of giving" the established method of support for pastor and church instead of tithing? It is more consistant with "salvation by grace through faith" in every aspect of a Christian's life.

Excellent work on such subject: "Tithing is not for grace time"; BTW it's heresy. Tithing nowdays is false teaching. And there's no historic and especially biblical support for its practice for the church, Mt 11:28-30.

Simply read all of Malachi. In 1:6 he starts telling about how the priests are keeping the good stuff for themselves and offering polluted bread upon the altar.

Chapter 2 verse 1 reads: "And now, O ye priests, this commandment is for you." Malachi leaves no doubt who he is preaching to.

In Chapter 3:10 he says to the priests, "Bring ye all the tithes into the storehouse, that there may be meat in mine house and prove me now here with.....

He was plainly preaching to the evil priests who were taking part of the tithes people brought to the temple and keeping it for themselves. I beg you to read it carefully and prayerfully for yourself and not let some modern day charlatan tell you that you must tithe to the church. There is no New Testament unction to do do. Early Christians sold what they had and communally shared it. Most early Christians had no money to tithe to the church under any circumstance. Tithing as a church ritual was instituted by Charlemange in 777 AD. It was and is a totally Catholic idea to get riches for Rome. Protestant churches organized after Martin Luther did not believe in tithing. That was one of the practices they were "protesting". Somehow Satan slipped the idea of tithing to enrich preachers back into the church.

John Smyth, a Separatist and considered by many the first ‘modern’ Baptist, said: “Wee hold that tithes are either Jewish or popish.” Roger Williams , who settled in Narragansett Bay (now Providence, RI) in 1636, said that ministers should serve freely “and that not in stinted wages, tithes, stipends, salaries” are they to be paid. John Bunyan (1628–1688), author of Pilgrim’s Progress, commented on Luke 18:10–13: “This paying of tithes was ceremonial, such as came in and went out with the typical priesthood.”

Please do not take my word or anyone elses, do your own Bible reading and do it praying for understanding. This tithing lie has driven far too many people away from our churches and ultimately from God. Jesus said, "My yoke is easy and my burden light." Money hungry people have created a heavy burden and a hard yoke just to enrich themselves.

So sorry to see that so many Baptist churches have fallen from an earlier, better understanding of Scripture.

I realized something else about those who preach tithing - they say we're to give on the gross, not the net. God only commanded a tithe on the *increase*. Makes a huge, huge difference. Of course, when they teach that the tithe was carried over into the NT, tithing on money makes it easier to really rake in the dough because every paycheck is an "increase". They don't go by a tenth of the raise (which would be "the increase") you just got this year. I wonder if anyone else ever thought of that?

Storehouse tithing is even sillier if the Mal. 3:10 storehouse wasn’t at the temple. "Perspectives" demonstrates your willingness to consider new or different viewpoints. I would appreciate your response to my interpretation, which intimidates me because it is contra to what appears to be the unanimous view that the Mal. 3:10 storehouse was at the temple. I believe that view is clearly negated by the Word.

1. Malachi admonished Israel to return to “My statutes”; not Hezekiah’s unlawful command. Although the commuting priesthood would’ve taken their food to the temple, there is no command in “My statutes” for anybody – including the serving priests – to deposit tithes at the temple. Thus, since the sons couldn’t “return” to and obey a statute that didn’t exist, the Mal. 3:10 storehouse can’t possibly be the temple storehouse.

2. Nehemiah got the storehouse venue right. He commanded tithes to be given in the plural storehouses at the several walled cities. Neh. 10:37; 13:12 (the Septuagint of Mal. 3:10 also renders plural storehouses). From where in the “book of the law” (Neh. 8:1; 9:3) did Nehemiah derive that venue? It can’t be Deut. 14:22-23, which commanded grain farmers to eat their tithes – not deposit them in a storehouse. The Word instructs that Nehemiah based his command on something Ezra read from Deuteronomy. “My statutes” commanded tithes to be “given” and “deposited” at the gates of each farmer’s walled city. Deut. 14:28-29; 26:12-13.

4. Malachi’s use of hamma‘ăśêr shows that the storehouse was in the hundreds of walled cities in Israel. Since “storehouse” nowhere appears in “My statutes”, we must derive its venue from Malachi’s use of hamma‘ăśêr in Mal. 3:8 and 3:10. By following hamma‘ăśêr through “My statutes” – as Malachi admonished Israel to do – we find it only appears 3 times: the Deut. 26:12 command to give the triennial tithe in each farmer’s walled city and twice in Num. 18:26, where Christ told Moses to command the Levites to take from the sons “the hamma‘ăśêr which I have given you from them for your inheritance.”

5. It isn’t “tithes and offerings” – it’s “the tithe and the offering”. Only 4 of 53 translations properly render hamma‘ăśêr and terumah, which are definite article singular. “The whole nation of you” had to do two things for there to be “food in My house”: (1) the sons had to give the hamma‘ăśêr to the Levites in each walled city (Deut. 26:12) and (2) the Levites had to “present a terumah from it to the Lord” so that He could give it as the Lord’s portion to the priests (Num. 18:26). Your thesis seems to make this point by observing, "The tithe to the priests by the Levites was not only an offering but was a sacred gift to Yahweh.”

6. How Great is our God. Christ’s triennial tithe never fell on Sabbatical or Jubilee years that prohibited food harvests – and therefore tithes – fully 30% of the years. The triple grain crop funded the 14:22 grain tithe, meaning both 14:22 and 14:28 could be obeyed exactly as written (Deut. 4:2). Your thesis correctly observes that “substituting” one tithe for another in some years to reconcile the commands “creates more problems than it solves”. The two tithes are reconciled when we realize that 14:22 only involved grain. When grain farmers had to give their new grain “of that year” under 14:28, they observed the 14:22 grain tithe by eating old grain funded by the triple crop.