From Denny Burk's blog, I saw the Rachel Held Evans interview on the Today Show. There were many overarching problems I had with what she said, but I want to focus on just three.

First, her application of Proverbs 21:9 is wrong-headed: "Better to live on the corner of a roof than to share a house with a nagging wife" (HCSB). In the video she says: "I made a swearing jar of sorts. Each time I caught myself in a habit of contention, I put a penny in a jar. And each penny represented one minute I had to spend on my rooftop doing penance." The side of the "swearing jar" said "No: gossip, nagging, complaining, exaggerating, snark." But Proverbs 21 is addressed to men, that they would be better off living on their roof than to live with a wife who nags or is contentious. There is NOTHING whatsoever in that text that hints at the wife going on to the roof or punishing herself (or being punished) for nagging by going on the roof. Her going on her roof is totally irrelevant to "biblical womanhood" in any sense of the phrase. 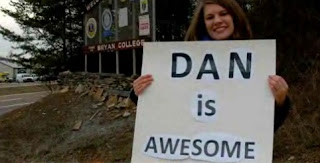 Second, she quotes Proverbs 31:23, saying: "Proverb 31:23 says that "a virtuous woman's husband is praised at the city gate." Then she says: "I made a sign, took it out to the entrance of my town, and praised my husband the right way." The sign read: "Dan is awesome". Is holding a sign at the entrance to her city a modern day application of Proverbs 31:23. A couple of comments here. First, the way she quotes Proverbs 31 makes her application close, but off the mark. The verse (as she quoted it) does not say that the virtuous woman does the praising, just that the husband is praised. Also, the city gate probably would correlate better to a place where people congregate in modern towns, which would not be where she was standing with her sign. The NET Bible has a footnote at this point: "The 'gate' was the area inside the entrance to the city, usually made with rooms at each side of the main street where there would be seats for the elders. This was the place of assembly for the elders who had judicial responsibilities." Second, she quoted the text incorrectly. The NIV (2011) states that verse this way: “Her husband is respected at the city gate, where he takes his seat among the elders of the land.” So the  NIV (2011) doesn’t say “praised” but that he’s respected. How about other translations?

“known” (KJV, ASV, RSV, NKJV, NRSV, NASBupdate, ESV, HCSB)
“man of note” (BBE)
“respected” (NIV84, NJB, TNIV)
“well known” (NLT, NET)
So her standing at the entrance to her city has no relationship to "biblical womanhood," just like her spending time on the roof of her house. Totally irrelevant!

Third, of course there are bigger issues here. She conveys no sensitivities to the concept of progressive revelation or the change in the covenants. She simply seems to be trying to mock Scripture. Well, that and to undermine those advocating things like submission to husbands. While I've only mentioned two examples, several more could be given from that short video clip.

I highly recommend that you read Denny Burk's comments, as they are very well stated.
Posted by David A. Croteau at 7:00 AM