Edward and I were at a sub shop eating lunch. He was raised Jewish, but really didn't know much about Judaism, the Old Testament, not to mention Christianity. I had been meeting with him for a few weeks and he had started attending church. He had heard the gospel several times at this point and we had spent several hours going through the typical apologetics-type questions unbelievers ask. Then he said: "Many of my friends say that if I go to church and become a Christian that I'll have a better life: better friends, better finances, better health, a happier marriage, you know, those kind of things. Do you think that's true? Do you think that if I become a Christian that all those areas in my life would get better?" This, I think, is kind of a trick question coming from Edward.

A clear, faithful presentation of the gospel should be one of the main goals in evangelism, but some times we focus on other things, things that end up distracting and detracting. What is carrot stick evangelism? 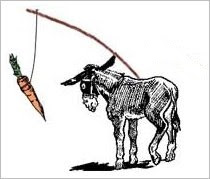 The phrase comes from the idea of leading a donkey or horse by tying a carrot to the end of a stick and holding it in front of them to lead them in the direction you want them to go. You hold out a "reward" for the animal when it does what you want it to do. You try to "attract" them to go in a certain direction.

So carrot stick evangelism is when we hold out things other than Christ as the reward or attraction to the Christian faith. What are these "other things"? It could be deliverance from depression or some illness. It could be a happier marriage or friends that are trustworthy. It could be a non-prosperity gospel explanation that when you use your resources the way God intends, that your finances will be in a healthier place. It could be that God will relieve you of all your anxiety. We can be so tempted to hold these things out in our evangelism, tempted to attract people to less anxiety, more health, a better marriage, etc. But is that what we should be attracting people to in our presentation of the gospel?

My answer is an unqualified "no"! And I'm NOT just talking about prosperity gospel preaching. Don't place the carrot on the stick in front of unbelievers of a "better life". I do believe that following the principles laid out in Scripture will typically lead to a more joyful life, in marriage, friendships, finances, etc. But ... but what if God decides that suffering an illness will help make you more like Jesus and bring Him glory? What will that young convert think when he is diagnosed with cancer three months after "making a decision" for Jesus? He'll think what many have said after hearing the "carrot stick" evangelism method: Christianity doesn't work. Instead of attracting unbelievers with these superficial things, let's attract them by lifting up Christ, His life, His death, His glorious resurrection and ascension. When the glory of Christ is explained, when His love as expressed in His life and death is explained, that is what should be attracting unbelievers. And what's their reward? Not just the avoidance of hell (another "iffy" gospel presentation method), but they gain Christ. Christ is both the attraction and the reward! If someone "makes a decision for Jesus" because they want a better marriage, I ask this: is that a true conversion? Did they convert to Christianity or to a man-made religion that gets them whatever they want? So this method distracts from what is the only thing that can truly draw them to God, Christ; it detracts from the glory of Christ by presenting a "better life" as more praiseworthy, more glorious than Christ himself. So how did I answer Edward?

"Edward, I do believe that following the principles in Scripture typically leads to the things you've mentioned, but I do not want you to come to Christ so you can get those things. I want you to become a Christian because you fall in love with the God of the Bible who has already demonstrated His love for you in the life and death of His Son. I want you to be attracted to Christianity because Jesus is so glorious! I want you to see that the reward of becoming a Christian is knowing Christ! Not some temporal reward of better health or more money. So, let's talk about Jesus and what he's done for you."
Posted by David A. Croteau at 7:57 AM