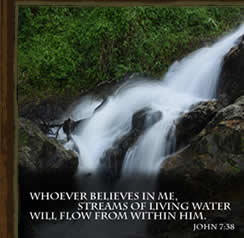 Let’s start a John 7:38-39: “He who believes in Me, as the Scripture said, ‘From his innermost being will flow rivers of living water.’ But this He spoke of the Spirit, whom those who believed in Him were to receive; for the Spirit was not yet given, because Jesus was not yet glorified.” Jesus uses the present participle of pisteuō. In the context, He appears to be referring to the current moment in which he makes the statement … that is, during his earthly ministry. The result of those who believe, in 7:38–39, as John clarifies for us (7:39), is the indwelling of the Holy Spirit. Jesus seems to be saying that anyone who believes him at that moment will become the fulfillment of Old Testament prophecy (“From his innermost being shall flow rivers of living water”). While much discussion on this verse has centered on the OT reference, that isn’t as important for us here. Some of the suggestions are Isa 44:3; 55:1; 58:11; Prov 4:23; Ezek 47:1; Joel 3:18; and Zech 13:1. I prefer Zech 14:15-19.

Regardless, John says that the Holy Spirit was not yet given, because Jesus had yet to be glorified. When Jesus was glorified, the Spirit was given, and then those who believed would become a fulfillment of this. However, during Jesus’ earthly ministry this was impossible. Jesus said himself in John 16:7 that it was not until he left that the Holy Spirit would come. And as Raymond Brown concluded: “it is apparent the gift of the Spirit is Jesus’ way of granting eternal life” (Brown, John, 2:741). So how could eternal life be granted prior to the Holy Spirit being given?
Posted by David A. Croteau at 11:39 AM