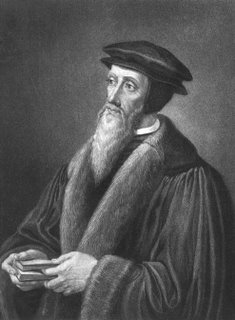 Admittedly, most conclude that John Calvin (1509–1564) advocated tithing. However, Calvin’s writings contain some statements that are cause for doubt on this conclusion. John Calvin (1509–1564) claimed, based upon Malachi 3, that God had instituted tithing so that His people would be continually reminded that everything belonged to God.[1] Regarding the phrase, “you ought to have done these” in Matthew 23:23, Calvin said:

He [Jesus] therefore acknowledges that whatever God has enjoined ought to be performed, and that no part of it ought to be omitted, but maintains that zeal for the whole Law is no reason why we ought not to insist chiefly on the principal points. Hence he infers that they overturn the natural order who employ themselves in the smallest matters, when they ought rather to have begun with the principal points; for tithes were only a kind of appendage. Christ therefore affirms that he has no intention to lessen the authority even of the smallest commandments . . . . It is therefore our duty to preserve entire the whole Law . . . Hence we conclude that all the commandments are so interwoven with each other, that we have no right to detach one of them from the rest.[2]

While on the one hand tithes are called an “appendage,” he also referred to preserving the entire law, even the smallest commandment. Thus, Calvin appears to say that tithing continues into the New Covenant. Powers concludes: “[T]he fact that Calvin placed major emphasis upon ‘the principal points of the law’ did not lessen his belief in the tithe as the stipulated method of giving.”[3]

Tell me if the following quotations by Calvin change your conclusion.

JOHN CALVIN ON THE LAW OF MOSES:

FROM THE END OF: http://www.wordofhisgrace.org/LutherMoses.htm.

Calvin referred to these laws as the "equity" of the Mosaic Law (Inst. 4.20.16). Both Calvin and Luther agreed that anything in the Mosaic Law that was not "general," "common," or "equitable" to all nations no longer applied to the state, seeing that those specific laws were applicable only to Israel.

***Calvin argued, "I would have preferred to pass over this matter in utter silence if I were not aware that here many dangerously go astray. For there are some who deny that a commonwealth is duly framed which neglects the political system of Moses, and is ruled by the common laws of nations. Let other men consider how perilous and seditious this notion is; it will be enough for me to have proved it false and foolish . . . It is a fact that the law of God which we call the moral law is nothing else than a testimony of natural law and of that conscience which God has engraved upon the minds of men. Consequently, the entire scheme of this equity of which we are now speaking has been prescribed in it. Hence, this equity alone must be the goal and rule and limit of all laws. Whatever laws shall be framed to that rule, directed to that goal, bound by that limit, there is no reason why we should disapprove of them, howsoever they may differ from the Jewish law, or among themselves . . . For the statement of some, that the law of God given through Moses is dishonored when it is abrogated and new laws preferred to it, is utterly vain. For others are not preferred to it when they are more approved, not by a simple comparison, but with regard to the condition of times, place, and nation; or when that law is abrogated which was never enacted for us. For the Lord through the hand of Moses did not give that law to be proclaimed among all nations and to be in force everywhere; but when he had taken the Jewish nation into his safekeeping, defense, and protection, he also willed to be a lawgiver especially to it; and -- as became a wise lawgiver -- he had special concern for it in making its laws (Inst. 4.20.14, 16; also see Calvin's comments on Rom. 1:21-27 and 2:14-15).