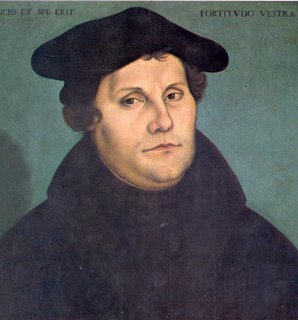 Luther preached a sermon in 1525 (the same year as the Peasants’ Revolt) titled “How Christians Should Regard Moses” while preaching through Exodus. In this sermon he directly addressed the issue of the Mosaic law and the gospel. He concluded that none of the laws of Moses are binding on Christians because they were all given to the people of Israel (Luther, “How Christians Should Regard Moses,” in Luther’s Works [1960], 35:164). While there are certainly laws that apply to both Gentiles and Jews (e.g. stealing, adultery, murder), they are all part of the natural law that is written on everyone’s heart. Even the Ten Commandments are not binding on Christians, as Exodus 20:1 made clear. He concluded that Moses’ teaching only applies to Christians when it “agrees with both the New Testament and the natural law.” This is where Luther’s thoughts can be inappropriately used as a proof-text to advocate tithing. He said that he wished that the emperor would use the Mosaic law as a model. He gave as an example the Mosaic law of tithing, referred to it as “a very fine rule,” and argued on pragmatic grounds why it is such a useful principle (ibid., 166-67). However, he concluded, ““There are also other extraordinarily fine rules in Moses which one should like to accept, use, and put into effect. Not that one should bind or be bound by them. . . . The Gentiles are not obligated to obey Moses” (ibid., 167). Finally, he applied this concept specifically to the law of tithing: “But the other commandments of Moses, which are not [implanted in all men] by nature, the Gentiles do not hold. Nor do these pertain to the Gentiles, such as the tithe and others equally fine which I wish we had too” (ibid., 168). Therefore, Luther explicitly referred to the tithe as not binding on Gentiles and not part of the natural law.
Furthermore, it should be noted that Philip Melanchthon, a contemporary and friend of Luther, “argued that the contemporary tithe was not that of the Old Testament, from which Christians are free, but rather a tax imposed by temporal government which Christians are bound to pay (Rom. 13, 7; Matt. 17, 24–27)” (Kolb, “The Theologians and the Peasants: Conservative Evangelical Reactions to the German Peasants Revolt,” Archiv für Reformationsgeschichte 69 [1978]: 117).
These conclusions regarding Luther and tithing have not been located elsewhere. For example, see Sehling, “Tithes,” in The New Schaff-Herzog Encyclopedia of Religious Knowledge (1950), 11:455; Powers, “Historical Study of the Tithe,” Ph.D. dissertation, 129–31.

Two editorial comments, made (presumably) by E. Theodore Bachman:
“all the stipulations of that law, insofar as they go beyond natural law, have been abolished by Christ. The Ten Commandments are binding upon all men only so far as they are implanted in everyone by nature. In this sense Luther declares that ‘Moses is dead.’” - Luther, “How Christians Should Regard Moses,” in Luther’s Works [1960], 35:159.
“So far as ‘Moses’ is simply the Sachsenspiegel or law code of the Jewish people as a national ethnic group, it can be listed as just one code of laws among many, features of which may or may not be considered desirable in another age or nation.” Ibid.

Luther:
“‘If I accept Moses in one respect (Paul tells the Galatians in chapter 5[:3]), then I am obligated to keep the entire law.’ For not one little period in Moses pertains to us.” Ibid., 166.
Posted by David A. Croteau at 5:02 PM

I am not meaning to personally attack--I am legitimately seeking to know and do God's will, too.
But...if you are seeking to be a slave of the Word (and submit your opinions and will to it) why do you care about Luther's perspective? Who is he to decide and declare what is or is not natural law? It is a fact that cultures and religions around the world feel an obligation to give something to "god." So is that a sign of "natural law"? Where is natural law in the Bible?
I am a Lutheran pastor and Luther sermons and quotes are banged around like clubs to beat up all manners of people and practices. My reading of "Scripture Alone" is that we have a gospel opportunity to give sacrificially to the One who sacrificed for us and graciously still also gives us all things (Romans 8:32).
Our giving should be heart-motivated and individually decided, so yes there is no "law" or compulsion. But wouldn't the grace-transformed, Spirit-led heart feel compelled by gratitude to give at least the old legal obligation, as a reflection of what we were freed from?
Battling legalism seems like a full-time job, but then again, I KNOW that fixing my eyes on Jesus and abiding in Him and in His Word (a la John 15:7) is a full time job. I look forward to your perspective!
Jerry McNamara (Galatians 2:20)

If sola scriptura is the standard, than historical theology, the welth of experience and revelation of everyone from Augustine, Clement, Ignatius, Justin Martyr, Tertullian, Aquinas, Luther, Calvin, Bunyan etc are to be tossed out as well. To rely only on our Spiritual experience and revelation regarding the Word, is to forget the opportunity we have to 'stand on the shoulders of Giants.' As ministers we have the responsibility to examine and re examine. Semper Reformata... agreed?