The following are the six worst arguments used to support the continuation of tithing ... listed from THE worst to ... the least worst.
Specious (Deceptively Attractive) Arguments

(2) Continuity Argument: The “people of God” (be they “Israel” or “the Church” or whoever) have always given a tenth and Christians should also.

(3) Concession Argument: The New Testament command is to sell everything and give it to the poor. However, since we know that Christians will fail with this command, they should at least give a tenth, what the Jews gave.

(5) Anecdotal Argument: God’s blessing on those who have faithfully tithed demonstrates that this is his method for giving in the current era/dispensation.

(6) Tithing as the Eleventh Commandment: The first command to tithe in the Bible is in Leviticus 27:30–33. Since Leviticus 25:1–2 places the context of Leviticus 25–27 on Mt. Sinai, tithing should be considered as binding as all the Ten Commandments.

Have you heard any worse arguments? I'll provide some more "bad" arguments in a little bit. 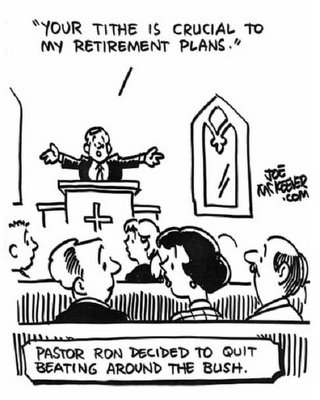 Dave, I think five of these are indeed bad arguments. I don't think the "greater grace" argument to encourage greater giving is all that bad, however, since the NT uses it in other matters and seems to apply with one's finances as much as anything. It's not good if used as a guilt trip, but if used as a logical argument to encourage giving, period, then perhaps it works.

The biggest problem I have is that tithe--when collected and called such--is used in unbiblical ways. Sure it's supposed to support religious leaders; but what about parties and feasts, the poor, refugees, fatherless kids? What percent of modern tithe, I wonder, supports such biblically mandated activities?!? In this regard, Tim Keller's use of tithe is instructive and interesting, though I'm not persuaded it's actually the best approach.

I think another difficult argument, though I don't call it "specious" (that's a strong word I save for intentional deception), is that Jesus taught this. Granted he applied it to the Pharisees, I'm not so sure that he applies it every and always (Mt 23:23). But I'm sure you'll get to that!

Notice the way the argument is stated: "Christian giving should exceed the giving of the Jews." You may be assuming that Jews gave ten percent of increase. If you study tithes in the OT, plus offerings, plus other required contributions (e.g. gleanings)(note: some offerings were basically required contributions), they gave WAY MORE than ten percent. Therefore, if you accept this argument, you'd better be giving OVER 20-30% ... maybe even 40-50%. Therefore, it is a horrible argument for saying that Christian's should "tithe," since if we give 11%, we are actually giving less than the Jews.

The biggest problem with the tithe continuing is that everything that undergirded or gave it a purpose has been replaced in the NT or fulfilled.

(1) Way to break up the posts into organized sections, it's much more readable. Well done.

(2) Thanks for explaining the phrasing--that makes sense; it's one of the things that bothers me, as I said, in the last post.

(3) I think the response would be (not that I'm defending it) that there is congruence in church-temple, the poor in the community are still the poor, and we are still told to care for those who minister, just as the Levites who ministered were cared for in the OT.

My own personal belief at the moment is that the "love command" was so strong and so strongly felt, particularly in "Christian wallets," that putting numbers or percentages on giving didn't really seem to be necessary, as it didn't add anything that true Christians wouldn't already be doing.

The only thing you have to be a hawk on, Dave, is telling others to replace "tithe" teaching with proper NT teaching on giving--very, very hard on love of money and covetousness, and very regular teaching and modeling of giving to missions (including the local church) and the poor.

My biggest problem with "anti-tithe" writings is that they fail to replace the ten percent rule with ANYTHING! Sometimes you'll get 3 or 4 principles, but the NT (and OT) contain an abundance of principles to consider when giving. My dissertation contains almost 20 pages trying to reconstruct a New Covenant paradigm for giving. If I didn't do that, I was just trying to harm the church.
The NT commands us to take care of the poor; the NT commands us to take care of those who preach the gospel. So, why do we need to even mention tithing?
My thoughts on this will become much more accessible soon.
Jason, thanks so much for interacting with me. If there is any one reason my thoughts aren't sharp, it's because they haven't been challenged by guys willing to take me on. I appreciate your thoughts and questions.

I like how you titled this "deceptively attractive". It sounds so good and sounds so right, that it's gotta be true. I especially like number 1. http://churchtithesandofferings.com