The Six Best Arguments for Tithing

These are all arguments that I believe deserve serious consideration, though I think they all fall short of convincing. This list will be a count down, with the last one (1) being the strongest argument.

(5) The Argument from Hebrews: Hebrews 7 proves that Christians should tithe. Since tithes were due to Melchizedek, and Jesus is in the line of Melchizedek, tithes are now due to Jesus.

(4) The Argument from Jesus’ Teaching: Matthew 23:23 should be understood as Jesus commanding Christians to tithe. Rather than referring to Matthew 23:23 as a command, some use commend, endorse, approve, or sanction. Furthermore, if Jesus wanted to abrogate the law, this was the perfect time to do that.

(3) Moral Law Argument: The Mosaic Law has three parts: Civil Law, Ceremonial Law, and Moral Law. The first two have been abolished by Christ. Tithing is a part of the moral law and therefore continues. One way this is done is through the fact that tithing existed before the ceremonial law so it can not be “typical.”

(2) Paul commended tithing conceptually: Though Paul never mentioned tithing explicitly, the concept is present in his epistles. While 1 Corinthians 16:2 is sometimes used, 1 Corinthians 9:13 remains the strongest verse in arguing for the continuation of tithing.

(1) The Argument from Natural Law: Since tithing was practiced before the Mosaic Law and by all nations in the history of the world, it is a part of natural law or is a universal law (typically based upon its ancient practice). The only reasonable explanation for the consistent use of “10%” must be that God commanded it very early, if not in the Garden.

In total, 20 arguments have been presented. They have been listed in order from weakest to strongest. Does anyone know of a "better" argument for tithing ... besides the cartoon below! 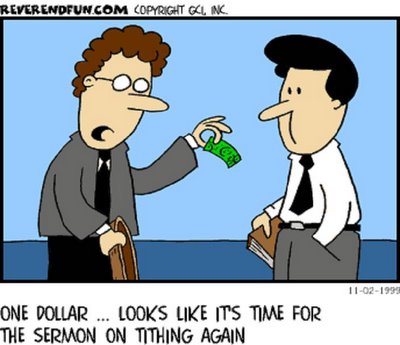 You might be interested in reading the free (downloadable) book on tithing by Dr Russell Kelly, who did his Ph D on tithing. His website is http://www.shouldthechurchteachtithing.com/

I've read it. Dr. Kelly and I are friends. Thanks!

20 pro-tithe arguments all up. Nice work.

I've heard another that i *think* isn't on your list.

"Tithing as a redemption"
This comes form Robbert Morris' book "The blessed Life".

1. establish the principal of first born. These must be redeemed or sacrificed. Ex 12:13. The first portion is the redemptive portion.
2. increase from the land, aka firstfruits, also belongs to God. Ex 23:19, Proverbs 3:9
3. Tithing from gross before bills is the 'first' of our increase, the first fruits. It is holy. Rom 11:16
4. Therefore, following these principles, the tithe redeems our whole increase and provides for a blessing on the rest.

Excellent post. We need to liberate the Christian community from the bondage of tithes. Have you also visited this website:
http://www.stoptithing.com
Keep up the good work!

The biggest problem - and it's an enormous one - is that the idea of the tithe establishes a standard of righteousness that is other than Christ, and as the Apostle Paul wrote "if righteousness could come by the Law, Christ died for nothing". I think many of the arguments for tithing miss this pivotal point completely. Setting a standard for giving in this way seeks to establish a KPI for righteousness - give 10+% or you are 'robbing God'. The Kingdom of God demands no less than 100% - the preparedness to give up everything (hence Jesus' commending the offering of the widow). (This seems to be reflected in the writings of the Early Fathers. Was it Origen that said that the tithe was no more binding than circumcision. When we consider the barb that lies behind that metaphor we might give this a little more respect.)
Whether the Lord asks for 100% is surely another question, but it is also a question between the Lord and His servant - not something that needs to be adjudicated from outside (and certainly not by those who benefit most from the outcome) I don't understand how His words to the Pharisees - that were prefaced with a condemnation of their hypocrisy - can in any way be taken as an affirmation that ANYONE should tithe. He seems to be stating very clearly that those who would be judged according to the righteousness that comes from the Law must fulful ALL of the Law, not just the convenient bits. For anyone to see in this a teaching for Gentile Christians simply beggars belief - especially in the light of Acts 15 and most of the Anti-Judaizing polemic so typical of Paul's writings.

1 Cor. 16: 1
"Now concerning the collection for the saints, as I directed the churches of Galatia, so do you also."

This money was not intended for God but to finance the early disciples ministries.


Sorry about the email address above, trying to avoid spam bots :)

4. The Pharisees were under the law, knowing this, Jesus addressed them under the law. Note they tithed food, just like everywhere else in the OT.

3. There is no Biblical foundation or evidence that tithing fell under "Moral law".

2. Paul was merely making an argument that disciples should be fed just like the Levites were fed when they tended the altar and the temple. There is no mention of honoring God in 1 Corinthians 9:13.

1. Since when do we base arguments upon natural law? I feel this is your weakest argument of the six. If it was so important why wasn't it mentioned in the creation story? This would have been a prime place to mention it:

Genesis 2:17
' To Adam he said, "Because you listened to your wife and ate from the tree about which I commanded you, 'You must not eat of it,'
"Cursed is the ground because of you;
through painful toil you will eat of it
all the days of your life. '


Your brother in Christ, seeking the truth even when it's not popular.

I know this was posted years ago, but i saw that you posted Deuteronomy 16:17 as an argument for tithing. This is ironic to me because i actually use Deuteronomy 16:10 (mirror verse) to prove free will giving for the Church.

Deut. 16:10 is the ONLY Mosaic command on giving that is also quoted in the New Covenant to command giving. That is significant in itself. Add to the fact that this passage commemorates the birth of the Church on the Day of Pentecost, and this becomes a powerful combination to promote the initial launch of freewill, spririt-led giving for the Church.

tithing ... one of the most controversal issue that divides some believers (if not all). Since every christians holds on to pro and anti in the issue of tithing, why not unite our view as a christian. Let them believe and do what they view as right about tithing. If you are convinced that tithing is still applicable, do it as your heart dictates you, if not, do it gladly and give to God as generous as He will. ... The Philippines

The Philippines,
While that sounds like a great idea, the problem is that pastors need to instruct their flock on giving, and if they believe in tithing they will teach it. Thus, as Christians we need to wrestle with this issue in love, gentleness, and respect.

The biggest problem with the tithe is the inherent legality of the practice. "Tithe" means "tenth". It is a law of a tenth, and you can't even be considered "spiritual" until you start giving above the tenth, which is a lot of giving for a generally poor community! The law of the tenth is actually a psychological persecution of the less-wealthy in the church, at least in so much as the tithe is taught as "ten percent of everything you make", rather than ten percent of your "increase" over a certain level of sustainable income. Regardless, there are actually hundreds of verses that touch on tithing in a tangential way, and I always read them as a general condemnation of the practice! I Samuel 8:15, for instance, seems to imply that a free people will be oppressed by their supposed leader who will use a tenth of their increase for his own purposes.

Keep up the good work.

I suppose "whatsoever you purpose in your heart so let him give" mean something, huh? Tithing certainly was instituted into law wasn't it? Galations 3:13 has some strength, and Jesus' Blood is not worthless in this regard of being cursed in the New Testament. Have you not read that the law is not of faith? Professing "you're cursed with a curse" in the New Testament is unscriptual. Does the heathen get exoneration and God's children are punished with ghastly sicknesses and diseases, I don't believe so, of course not. The Scriptures declare "Christ hath redeemed us from the curse of the law". "The strength of SIN IS THE LAW". Again, the law is not of faith....whatsoever is not of faith is sin.Tithing is volunteer ie volitional. There aren't hardly any members in any given Church whose barns are "pressed down shaken together and running over" from Malachi of the Old Testament. Those men were penny-pinching and chizzling God's money then giving the impression they were consistent tithers because they handled the agricultural stuff of mint, cummin, spice which were very costly and valuable.

Where are the people writing about Cyprian and Pope Adrian The First and Constantine? RE: how tithing began. I don't see any comments about this. But I'm just getting started reading through this blog.

I had to walk out of the institutional church 6 years ago to finally be able to even begin closing my bible and looking elsewhere for the sanity of my soul.

I have a lot of trouble opening my bible at all now because it is the most confusing, conflicting ,convoluted piece of literature i've ever read in my life. Tim Germain's The Church Beyond Imagination was the first thing I read that helped me feel as I wasn't doing something wrong by walking out of an institution founded on lies. Like the tithe lie. I'm just starting to do more research now on the whole religion aspect of my life, now that I'm out. If god is a spirit then that is where i need to restart my entrance to god. In the spirit, not in textual massacres. San Diego. Melissa Session

But I have to get through this writing for my own sanity.